John Hardy Appointed Sheriff by the Granville County Board of Commisssioners 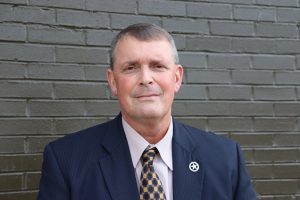 Speaking on behalf of the Board of Commissioners, County Attorney Jim Wrenn stated, “the Board of Commissioners made a concerted effort to recruit a qualified individual to shepherd the Sheriff’s Office through this transitional period until the citizens of Granville County have the opportunity to choose their preferred candidate in the upcoming elections. The process to fill the remainder of the current unexpired Sheriff’s term was crafted to ensure that the chosen individual would have the necessary qualities to lead the Sheriff’s Office for the next year and would also pledge to refrain from filing to participate in the 2022 election for Sheriff and not publicly support or endorse any candidates for Sheriff. The Board of Commissioners believe that John Hardy will continue his distinguished career of public service by successfully guiding the Sheriff’s Office to the conclusion of the current term in the dedicated and professional manner shown throughout his career.”

Hardy enters this role with over twenty-nine years of military and law enforcement experience, beginning his career in 1987 with the North Carolina Army National Guard. Hardy served as an Infantry Officer in the United States Army and United States Army Reserve for seventeen years, achieving the rank of Major. Concurrently, through much of his time in the Army Reserve, Hardy completed twenty-five years of service in federal law enforcement as a Correctional Officer with the United States Federal Bureau of Prisons (assigned to FCC Butner) and a Deputy U.S. Marshal with the United States Marshals Service (assigned to the Eastern District of North Carolina). Hardy has also served the community in local government law enforcement in the Patrol Division of the City of Oxford Police Department for approximately three years, achieving the rank of Corporal. He also served for a few months as a Deputy Sheriff in the Court Security Division with the Granville County Sheriff’s Office.

The Board of Commissioners chose Hardy for this position based on his extensive supervisory leadership and educational accomplishments, including his distinguished service as an Infantry Platoon Leader with the 101st Airborne Division during Operation Desert Shield/Storm, Executive Officer and Company Commander with the 108th Training Division of the U.S. Army Reserve, Acting Supervisory Deputy with the U.S. Marshals Service, and Acting Sex Offender Investigations Coordinator and member of the Critical Incident Response Team with the U.S. Marshals Service.

Hardy is a graduate of J.F. Webb High School, and the University of North Carolina at Chapel Hill. He received his certification in Basic Law Enforcement Training (BLET) from Vance-Granville Community College. Hardy resides in the Brassfield community in Granville County.