History of the Park Site

In 1989, North Carolina joined a regional compact to build five (5) waste incinerators for a private company called ThermalKEM. By May of 1990, the list of proposed North Carolina sites had been narrowed down to two: one on the Rowan/Iredell County border and one just outside of Oxford in Granville County. The land proposed for the Granville County site totaled 580 acres off Belltown Road and consisted of combined property from nine (9) different landowners.

When Granville County residents heard that the state might 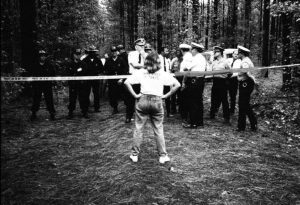 Image from “Whatever It Takes: How Granville County Fought and Defeated the Hazardous Waste Incinerator” by Michael Arnold.

take land from local farmers and landowners to build a

toxic waste incinerator, they took action and protested
against the project. To legally protect the property, Oxford
attorney John Pike secured a loan from Adams Tobacco
Company and purchased the 48-acre Ellok Jones farm, a
tract of land right in the middle of the proposed incinerator
site. Ownership shares of the Jones’ farmland were then
sold at only $5.00 each to approximately 8,000 people, some
as far as the Soviet Union and South America. Facing nego-
tiations with thousands of new shareholders, as well as having
to deal with protests and potential lawsuits, the state eventually
decided to abandon the project. 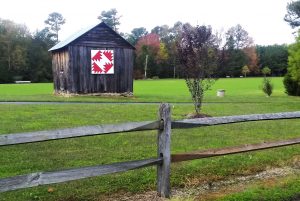 and with assistance from the Franklin Arts Council and
Granville County Tourism, a barn quilt was installed in
2020 as the GAP was added to the Quilt Trails of the
Tar and Roanoke Rivers. The barn quilt design honors
the efforts of Attorney John Pike to legally preserve
the land and is called “Barrister’s Block.” The artwork
is featured on an original tobacco barn from the Ellok
Jones Farm, which is still standing at the GAP today.

To watch the video of the GAP’s dedication in 2004, which includes historic film footage and photos, please click here. (45:47 in length).