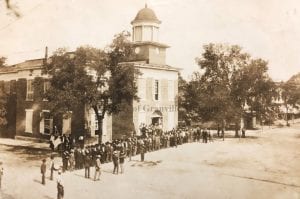 Granville County was formed in 1746 from the western portion of Edgecombe County, and was named in honor of John Carteret, Earl of Granville, one of the Lord Proprietors of the colony. Because there was no western border, the territory that comprised Granville County – at that time – extended all the way to the Mississippi River. (Today, the county is bounded by Vance, Wake, Durham, and Person counties, with the state of Virginia forming its northern border. The present land area is 537 square miles)

The first court in Granville County was held at the home of William Eaton, near Henderson. For the next eighteen years, court was held at various locations across the county. The most notable of these early locations was the village of Harrisburg, which was approximately 1 1/2 miles east Oxford and is no longer in existence.

In 1764, Samuel Benton, a member of the House of Commons, introduced legislation which moved the county seat to his plantation, “Oxford,” and gave the land on which the Granville County Courthouse currently stands. Although today’s Courthouse is not the first one constructed in Oxford, the City of Oxford is still the county seat and was incorporated in 1816.

The year 2021 marks Granville County’s 275th Anniversary.  County staff and volunteers have been working since early 2020 to plan appropriate festivities to mark this special occasion. To learn more about the planning process and the commemorative book commissioned from Lewis Bowling, visit the celebration’s information page at www.granvillecounty.org/275YearCelebration.