The Granville County Library System has announced the completed commission for an oil portrait of Maude Lassiter, the first African-American librarian in Granville County. Painted by artist Stephen Cefalo of Raleigh, NC, the portrait will soon be on permanent display at the Richard H. Thornton Library in Oxford.

A native of the Jonathan Creek community, Lassiter was born on Sept. 12, 1892 and was a longtime educator in Granville County, having earned degrees in School Administration and Religion from North Carolina Central University, Shaw University and Atlanta University. In 1942, she was hired as a librarian at the Granville Street Library, the county’s first library for people of color. This was a position she would hold for more than 23 years. During her tenure, she is credited with introducing literature and knowledge to many people of the community, as well as for bringing luminaries Mordecai Wyatt Johnson, John Hope Franklin and Langston Hughes to the area. The impact of Mrs. Lassiter’s contributions to the community and to education are still being felt today.

Juanita Rogers, Head Chair of the Granville County Library System’s Board of Trustees, remembers Lassiter as being “the essence of kindness, caring and dignity” and the Granville Street Library as being a place that was “quiet and conducive to reading” throughout her childhood and teen years.

“Maude Lassiter’s leadership embraced an ambitious vision for the future of many children of color who were exposed to her skillful guidance and lectures in communication, stressing that ‘reading was the key to knowledge,’” Rogers recalls. “The library offered a variety of books and periodicals from different academic disciplines. There I enjoyed reading ‘Ebony,’ ‘Jet,’ ‘Life’ and ‘Time’ magazines. Some of the outstanding African-American newspapers were ‘The Journal and Guide,’ ‘The African-American,’ ‘The Carolinian’ and the ‘Carolina Times.’ Mrs. Lassiter’s bold and patient leadership encouraged young people from Oxford and Granville County to venture out in life in various positions and careers.”

Lassiter was also active in over a dozen community organizations and was particularly noted for her dedication to the First Baptist Church of Oxford. After four decades of public service and a lasting devotion to her community’s right to education and information, Lassiter retired in 1966 and died five years later. She is buried at the Plummer Cheatham Memorial Park in Oxford.

Andrew Maloney, Branch Manager of the Richard H. Thornton Library, notes that a ribbon cutting and reception to unveil the painting are now in the planning stages; however, due to the COVID-19 pandemic, the date and time have not yet been determined.

“This painting was a collaborative effort by our staff to honor Maude Lassiter, a trailblazing woman who excelled in a field that had low black representation, in a state that was extremely segregated,” Maloney said. “We hope that this commission will also contribute to the representation of significant black citizens in our local history today, where they are often forgotten.”

Additional details about Maude Lassiter’s life and the history of the library she so skillfully directed are available through the North Carolina Room of the Richard H. Thornton Library in Oxford. Those interested in learning more can also contact North Carolina Room Specialist Mark Pace at 919-693-1121.

For more information about artist Stephen Cefalo, please visit his website at stephen.cefalo.com. 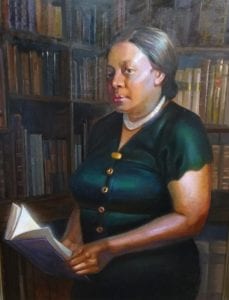