Granville County will be soon be marking a celebratory milestone, as the 275th anniversary of the area’s founding will be observed in mid-2021. Local author Lewis Bowling has been contracted by Granville County Government and the county’s 275th Anniversary Committee to create a comprehensive collector-style book focusing on the history and development of the county.

The book will soon be available for pre-sale to the public.

Granville County was formed in 1746 – thirty years before the signing of the Declaration of Independence – and was named in honor of the second Earl of Granville, Lord John Carteret. King George II had given most of the land that is present-day Granville County to Carteret as part of the Granville Grant in the 1660s. The first settlers here were attracted to the area by the availability of land at a fair price. An early trading path helped make Granville one of the gateways to the unsettled areas south of Virginia.

Bowling’s book will follow the development of Granville County from its early history to present day, with a narrative accompanied by photos that have yet to be seen by the public.

“I have been gathering new material for most of the summer,” Bowling said, “and have had a good response from folks who have been willing to share their photos with me. I appreciate the community’s help and support.”

Additional photos and information, Bowling explains, have come from the Masonic Home for Children, the Central Children’s Home, the North Carolina Room of the Richard H. Thornton Library, and the archives of the Oxford Public Ledger.

Bowling has already published several books that feature the history of the area, including commemorative books for the City of Oxford’s bicentennial and for Camp Butner’s 75th anniversary, celebrated in 2016 and in 2017.

“There is so much history here,” Bowling said of Granville County. “Even with all my research, I have not even come close to covering all of it.”

Those who reserve copies of the book in advance can save $5.00 off the book’s retail price, which will be set at less than $50.

“In all of our 275 years, there has not been a comprehensive book written about Granville County that could serve as a stand-alone work like this,” said committee member and North Carolina Room Specialist Mark Pace.

An easily-identifiable design to designate 2021 as the 275th anniversary of Granville County has also been adopted to help promote this observance. Additional details will soon be announced, as well as plans for next year’s celebration.

The 275th Anniversary Committee continues to meet monthly, with the next meeting scheduled at 2 p.m. on Sept. 17. For more information about this commemorative book, contact Mark Pace at the Richard H. Thornton Library at 919-693-1121. To learn more about the work of the planning committee, please contact Commissioner Sue Hinman at 919-691-1183 or at sue.hinman@granvillecounty.org. 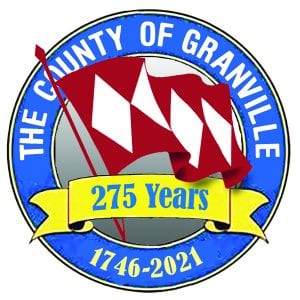