Author with Granville County roots to discuss her latest book

“Hinsonville’s Heroes” tells the story of 18 African-American men who served as Union soldiers in the Civil War, ten of whom are buried at the Hosanna Church Cemetery in Pennsylvania. After being named Dean of the School of Humanities and Graduate Studies at Lincoln University in 2012, Dr. Gooch took notice of the cemetery, located on the edge of the college’s campus, and became curious as to who was buried there. Over the next few years, she began to research the lives of some of the men who lost their lives more than a century ago. What were once just names on tombstones – George Duffy, Isaac Hollingsworth, Abraham Blake, Lewis Palmer and others – slowly became more real as Dr. Gooch learned more about their backgrounds and their service, connecting the relationships between Hosanna Church, the cemetery and the college campus in the process.

“This is an inclusive, historical narrative,” Dr. Gooch has said about her latest book. “These were people who would otherwise be forgotten, who transformed the state and the country through their service and their sacrifices.”

Through this book, Dr. Gooch tells the story of brothers Wesley, William and George Jay, who survived the bloody battle at Fort Wagner, SC and were part of the only black regiment to lead President Lincoln’s funeral procession in Washington, DC. Also featured are William B. Fitzgerald, Abraham Stout, Samuel H. Blake and Isaac A. Hollingsworth, who fought during the last battle of the Civil War, forcing Lee’s surrender at Appomattox Courthouse. Another member of the 5th Massachusetts Cavalry later settled in Durham, NC – Dr. Gooch’s presentation will cover aspects of his life, as well as several others from the free black community of Hinsonville, PA who served as members of the United States Colored Troops.

Other publications by Dr. Gooch include the books “On Africa’s Lands” and “The Forgotten Stories of Two Lincoln-Educated Missionaries in Liberia,” as well as numerous articles about the African-American experience. Over the past 20 years, Dr. Gooch has been researching her own family history for a book she eventually hopes to add to her list of published works. A descendent of the Gooch family of Granville County, her genealogical search for information led her to the Thornton Library’s North Carolina Room, where she learned she was descended from Silas Gooch, who was born in 1814. According to the death certificate that was located, Gooch lived to be 113 years old. Additional information about her family, however, has been difficult to find, as the same death certificate indicated that her ancestor’s parents were “unknown.”

“His ancestry is invisible, discarded,” she has said about her findings. “I wrote this book (Hinsonville’s Heroes) to put the lives of these men back into the historical narrative.”

Since its release, “Hinsonville’s Heroes” has sparked a new interest in the Civil War, as told from a different perspective.

Copies of the book will be available for purchase at Saturday’s discussion and book signing. The public is invited to attend. 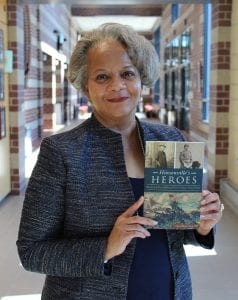