The Granville County Animal Advisory Committee will hold a special meeting on Tuesday, July 3, 2018 at 7:00 p.m. in the Meeting Room at the Granville Expo and Convention Center located at 4185 Highway 15 South, Oxford.  The purpose of the special meeting is to hold a hearing for a citizen contesting a Dangerous Dog Declaration.

On Tuesday, July 3, the annual Independence Day Celebration will be held at Lake Holt in Butner, with a spectacular fireworks show! Sponsored by Granville County Government, the Town of Butner, the City of Creedmoor, the City of Oxford and the Town of Stem, this family-friendly event starts at 9 p.m., with gates opening at 6 p.m. Bring a lawn chair, blanket, bug spray and a flashlight, then sit back and enjoy the show.

All attendees must enter and exit through the Lake Holt entrance. Once the gates are closed, they will not reopen until the fireworks show is over. Parking will be directed by Public Safety Officials.

Hot dogs and soft drinks will be available for purchase. No alcoholic beverages are allowed and no tailgating is permitted.

Due to the loud nature of the fireworks, please leave pets at home.

In the event of light rain, the show will go on as planned – no rain date has been scheduled.

For more details, contact the Event Coordinator at 919-764-1013 or visit events@cityofcreedmoor.org.

The Summer Reading Program of the Granville County Library System is now underway, with activities, programs and presentations scheduled throughout the summer months for readers of all ages.

This year’s theme is “Libraries Rock!” A kickoff celebration was held on June 9 at Oxford’s Lake Devin for summer reading programs at library branches throughout the county.

For many families, the public library serves as an available community space where access to free educational and cultural enrichment activities and programs are provided.  This year’s “Libraries Rock” summer reading program will motivate young readers to enjoy reading, develop positive attitudes about books and their local library, and have access to experiences that further their sense of discovery.

Adults and teens are also included in an ongoing schedule of summer events.

Library locations include the Thornton Library in Oxford, the South Branch Library in Creedmoor, the Stovall Library and the Berea branch. For details on summer reading program schedules, visit www.granville.lib.nc.us.

Show us what you’re made of, Granville County!

Granville County has much to offer, and what better way to bring attention to the talents of the people who live here than nominating them for statewide recognition through the ‘Made in NC Awards’ presented by ‘Our State’ magazine and Mast General Store? Now in its third year, the contest spotlights unique makers and business owners in four categories: Home and Garden, Style, Food and Drink and Art. All products must be able to be reproduced for sale, with submissions judged on quality, innovation, creativity and the connection with North Carolina.

One winner and two honorable mentions will be selected for each of the four categories, and an overall winner will be selected from the four category winners, receiving a $500 prize, an email and social media promotion and a quarter page ad in the December 2018 edition of  ‘Our State’ magazine ($2,000 value). Category winners will also be featured in the ‘Made in NC’ awards celebration on Oct. 13 in downtown Winston Salem.

Deadline for submissions is July 18. Winners will be announced on Aug 23. 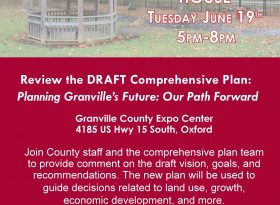 Next Steps in the Comprehensive Planning Process

Take the new Granville County Comprehensive Plan Survey (https://www.surveymonkey.com/r/GranvilleCompPlan2) to provide your vision for the County!  Also, plan on attending the public open house next Tuesday (June 19th) from 5-8 pm at the Granville County Expo Center (4185 US Hwy 15 South, Oxford) to review draft recommendations that have been developed based on feedback received so far.  The Comprehensive Plan for the county that will be used to guide decisions related to land use, growth, economic development, and more.  Come help plan Granville’s future! 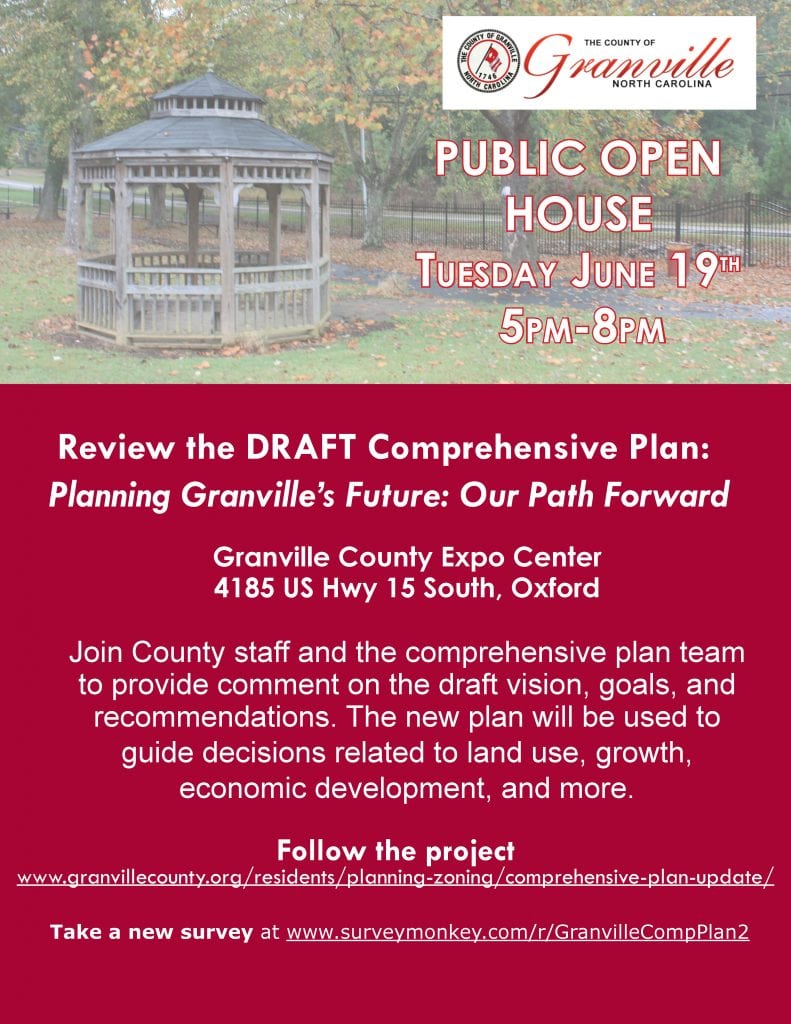 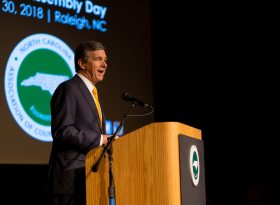 Among other things, counties discussed the need for public school facility funding and urged legislators to pass the Public School Building Bond Act, which would authorize a referendum on the ballot in November for a $1.9 billion statewide school construction bond. Counties also asked for more resources to deliver fast and reliable internet access to under-served areas of North Carolina.

Commissioners were also given the opportunity to visit legislative offices to meet with members of their delegation and advocate on behalf of their respective counties.

“It was important for me to let our state representatives know how their decisions impact the people of Granville County,” Comm. Hinman said about the event. “I enjoyed talking with them and interacting with them in that regard.”

“We were able to speak directly with Rep. Terry Garrison (N.C. House District 32) and Rep. Larry Yarborough (N.C.House District 2) about issues of education funding and incentives for economic development,” he remarked. “We asked our representatives to please keep us in mind when making decisions that impact our schools, our economy and other aspects of Granville County.”

Governor Roy Cooper was speaker for the event and described his mission to help North Carolinians become better educated, healthier and more prosperous through investments in education and workforce development.  He also affirmed the need to provide more flexibility and resources to counties to close the internet gap.

General Assembly leaders in the Senate and House, President Berger and Speaker Moore, discussed their desire to continue to expand jobs throughout the state by supporting a favorable business climate.  They also provided an overview of their budget priorities as reflected in the recently released proposal that adjusts the state’s biennium budget. Budget adjustments include a pay raise for teachers, additional lottery funds for public school construction, and incentives for internet service providers to facilitate the deployment of broadband access.

The event also included a panel discussion with N.C. Senators Jim Davis and Valerie Foushee, as well as N.C. Representatives Becky Carney and John Torbett, all former county commissioners who serve on the General Assembly’s County Caucus.  The panelists discussed the relationship between the state and counties and how counties can effectively work with their state legislators.

The annual event, hosted by the North Carolina Association of County Commissioners (NCACC), drew about two hundred county commissioners and staff from all over the state. 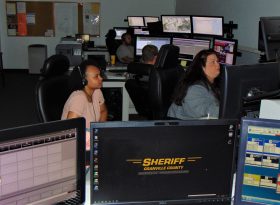 This summer, six rising seniors of Granville County Public Schools will be learning about local government through the Summer Civic Leadership Program as they rotate through several county departments. These interns represent Granville Early College High School and Granville Central High School, and were selected from several applications submitted for consideration. Pictured is Jade Webb of Granville Central (with headphones, left) on rotation in the county’s 911 Center. Other intern include Ethan Weaver, Lily Averette, Cameron Thorpe, Ker’Telian Fields, and Rickelle Harrison, who will focus on learning about Human Services, Community Service, General Government and Public Safety. 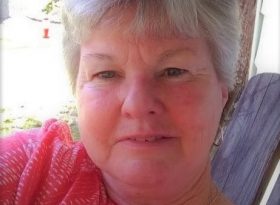 Lynn Allred has been named Public Information Officer/Grants Coordinator, effective June 1. In her new role,  Allred will serve as Granville County Government’s contact for the media, preparing news releases and public service announcements in print and through broadcast outlets, as well as online information sources. She will also develop informational brochures and other materials for the public.

Allred has more than 25 years’ experience in the media/communications industry, having most recently served as editor of the Oxford Public Ledger. Additional experience includes work with the Daily Reflector in Greenville and the Carteret County News-Times in Morehead City, as well as advertising/promotions work for a simulcast FM radio station covering most of eastern North Carolina.

A native of Granville County and a resident of Oxford, she holds a degree in Business Administration/Marketing from East Carolina University. 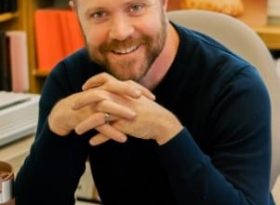 Meet Will Robinson, Interim Director of the Granville County Library System. Robinson previously served as Manager of the South Branch Library in Creedmoor and replaces Jonathan Bradsher, who recently resigned the position.

Robinson earned his Masters degree in Library Science from the University of South Carolina in 2012 and has previous experience with the Wilson County Library System, where he served as librarian in the Local History Library and later was the library’s Head of Reference. He worked in Wilson for five years before assuming the role of Manager of the South Branch this past December. He also holds a B.A. degree in Anthropology from the University of North Carolina at Wilmington.

Robinson’s appointment as Interim Director will continue through December 2018, when a candidate search for a permanent replacement will begin. There is currently an opening for Manager of the South Branch to fill the vacancy left there after Robinson’s transfer.

Originally from the Charlotte area, Robinson now lives in Cary with his wife and son, but has plans to move his family to Granville County in the near future. 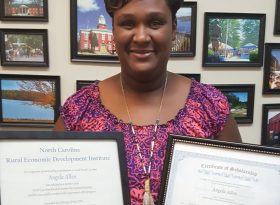 News from the Tourism Development Authority

Angela Allen, Director of the Granville County Tourism Authority, graduated in May from the Rural Economic Development Institute (REDI), an intensive, three-month training program designed for rural community leaders. This year’s class participants included elected officials, economic development professionals, healthcare professionals and civic leaders. Allen has also been elected to the Board of Directors of the North Carolina Travel Industry Association, nominated to represent the Destination Marketing Association of North Carolina.  The election took place in May at the organization’s Board meeting during the annual North Carolina Travel Industry Association (NCTIA) Tourism Day in Raleigh. A recent recipient of the ‘Rising Star’ Award, which recognizes a North Carolina Bureau or staff member who has worked a total of three years or less and has made a significant impact to destination marketing in the state, Allen plans to continue gaining leadership and tourism skills at the upcoming Southeast Tourism Society’s Marketing College in June. She will attend this training through a full scholarship provided by Miles Partnership.